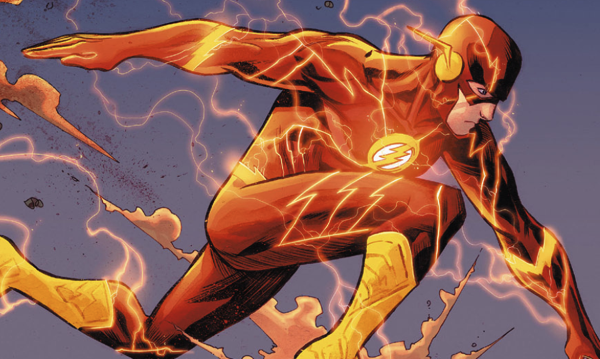 TODAY: The Flash and Bruce Banner!

A metropolitan cafe, with frustratingly vogue decor. The bar is a fish tank, and all the chairs look like they’re missing the necessary structure to support a body.

Various paintings texture the walls, some skirting that fine line between vulgar and artsy. The focal point in all these paintings is a giant portrait of THE FLASH, who is blessed with an overabundance of muscle and package.

BRUCE BANNER enters the cafe and rubs a hand over his unshaven face. Jeez. Easily the oldest person in this place by 15-20 years.

There’s a SNOOTY BARISTA manning the translucent bar, looking every bit of Sid Vicious. Bruce walks up to him.

SNOOTY BARISTA
Sit where ya want, gramps. He’ll be around.

Bruce nods and scopes out the place once more. If there’s a place to sit here, it’s not immediately apparent.

The Snooty Barista reaches across the bar and taps Bruce on the shoulder.

SNOOTY BARISTA
(pointing)
Yo! Table. Near the wall.

BRUCE
Are you sure?

He walks over to the place that the Barista pointed out and takes a seat..on a hand. That’s right. It’s a chair made to look like an opened hand.

The table itself is made to look like two hands splayed out in a begging position. Bruce places his hands on it and smirks.

BRUCE
(to himself)
This is the dumbest thing…

A RAINBOW BARISTA hops over to his table, bumping into it when she lands. She’s decked head-to-toe like she’s entering the Rainbow Bright Cosplay Competition 2013.

BRUCE
Do you guys have normal coffee?

RAINBOW BARISTA
Haha, you’re a cute old man! I’ll get it for ya right away!

She hops all the way back to the bar.

Bruce clenches and unclenches his fists.

The Flash appears across from Bruce. Pretty much what you would expect, except less muscle definition than advertised. He speaks rapid-fire like he was auditioning for _His Girl Friday_.

THE FLASH
So, you’re the green-meanie everyone’s talking about! Mister large-and-in-charge! The Jolly Green Giant! The-

Bruce assumes a pose like he’s being held at gunpoint.

THE FLASH
Nice to finally meet ya, sir! How have you been enjoying your stay in Central City? Wait! Don’t answer. I’m sure you’ve been having a blast. The people here are super friendly, and there’s a lot to do around here! Ohdidyouhavetroublewiththevalet?

THE FLASH
Did you have trouble with the valet?

THE FLASH
(miming and enunciating, slowly)
Did you have trouble with the valet?

BRUCE
No. I jumped.

A moment of silence.

The Flash tilts his head.

THE FLASH
From Avengers HQ?

BRUCE
Uh, Stark Tower, actually. I thought I would give my scooter a–

THE FLASH
Hold that thought!

He disappears for only a split-second before returning with their beverages: a hot coffee for Bruce, and a cappuccino for The Flash. The coffee spills just a little and Bruce wrinkles his nose at the slight.

THE FLASH
There ya go! Continue.

As Bruce speaks, The Flash can’t keep focused. The words dribble out WAY too slow.

BRUCE
(labored)
Um. Well, that was it, really. I mean, my scooter was having some engine troubles and I didn’t want to strain it too much. Tony has offered to soup it up with some of his tech, but Danielle is my scooter from college. Um, before…it, um, before–

THE FLASH
OKAY, WE GET IT!

The outburst startles Bruce and he clenches his hands.

THE FLASH
Sorry gramps. I’m not used to such a lengthy – ahem – conversation.

BRUCE
That’s okay. Uh, I just need a moment to–

The Rainbow Barista leaps at the two heroes once again, but biffs the landing and knocks the table into Bruce. Obviously, the hot coffee spills everywhere.

Take a second to appreciate the genius of a cafe with an all glass exterior.

The hand table and chairs are the first to burst out of the cafe, followed by the Rainbow Barista.

The Flash catches her right before she hits the street. All traffic stops. He sets her down.

He roars at everyone and starts running. Before he gets too far into traffic, he takes a leap and is gone from view in seconds.

Superheroes In A Cafe is formatted using SCRIPPETS which utilizes FOUNTAIN, a plain text markup language for screenwriting. Batman would be amused.