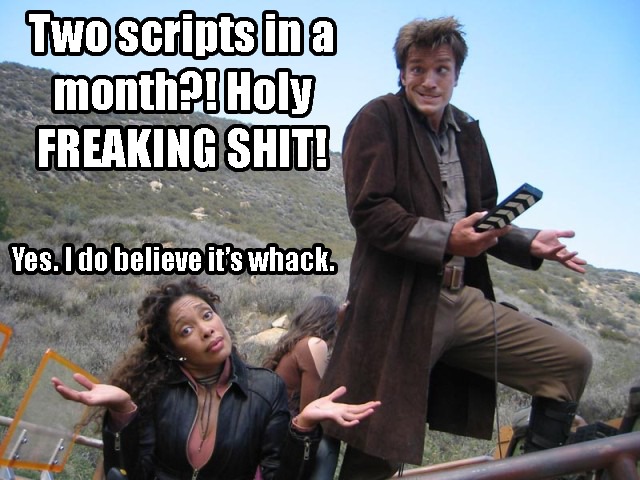 April 1st came around and two things happened: I completely forgot that it was April Fools Day and I began the screenwriting boot camp known as Script Frenzy. If you’ll recall, I wrote earlier about my plans to write two scripts to make up for the zero I wrote last year. Well, I’m here today to tell you that I’m done with my first script, LAMENT. It’s a Steampunk Western Revenge Flick about a father and a husband who will stop at nothing to kill the man responsible for ruining his life. There’s action, there’s drama and there’s enough steampunk to whet your appetite.

All in all, the script took me eleven days to write, averaging out about ten pages a day with a day or two off to keep my sanity. I discussed the beauty of outlining in my last post and the proof was in how easy it was to bang out the script. I essentially breezed through ten pages, checked my notes, and then soared through another. Naturally, my script ended at page 93.

Yes, it does. This was perhaps one of the more interesting aspects to my writing binge this past week or so. By around page 85, I started to burn out. When you burn out as a writer, the first thing that goes by the wayside is the prose. While you’re generally not supposed to flower your script with prose, the details help. I perused the pages near the end and realized that I had all but dropped the prose in favor of quick action text like, “Westin charges forward, shoots guy,” or “Westin kills bad guy.” On the first day, it was more along the lines of, “Westin steps off the train, letting his bag drop to the ground. He toys with the cigarette sandwiched between his lips and tosses it aside.”

You get the idea.

The other thing that also seems to fall by the wayside is the dialog. The first few days of writing (roughly 30-40 pages) saw some interesting dialog between the characters, stuff that gave you a decent idea as to what made them tick. Granted, we’re not talking Tarantino’esque yakking, but something useful for a first draft. By the last page, no one was saying a word except for the villain and he repeated himself to an annoying extent.

“Hey,” you might interrupt, “weren’t you supposed to do two scripts?”