I was recently asked the question of whether or not I would offer any film I made for free via peer-to-peer or Bittorrent. It didn’t take me long to respond with a resounding “hell no,” and I’ll explain why. Back in the day, I was quite the swashbuckler. When confronted on the issue, I would defend my lecherous ways to the teeth by exclaiming such proverbs as “fuck the man” and “the MPAA are jerk-faces!” If I was feeling particularly rowdy, I would just say something along the lines of “lol butts.” However, things changed for me and I did a 180 on how I view the whole “piracy” issue. This happened as I walked onstage and accepted my fake diploma, along with the germs of the President of Columbia College.

My career IS film.

If you think about it, the movies you see on screen are the result of hundreds of people working their asses off to create an end product that you can enjoy at your leisure. When you get it for free and share that free-ness with others, you’re essentially punching all those people in the nuts and stealing their lunch money. Do I need to give you a worse metaphor? Fine! When you decide to download Wolverine: X-Men Harder instead of paying to see it, you’re killing babies.

The argument that films these days are just too expensive has always been strange to me. When you go out to the bar, you usually blow anywhere from $20-$40 depending on your level of alcoholism. When you go out to eat at a place that isn’t Popeyes or McDonalds, you’ll probably put away somewhere in the ballpark of $10. Sporting events of any kind usually drain you more than a movie ticket’s worth. And what about matinee prices? What about second run theaters?

As I enter into the realm of filmmaking, I can’t help but think about all the people out there who feel it’s their right to watch a movie and never compensate anyone for it. Girl’s gotta eat, folks! 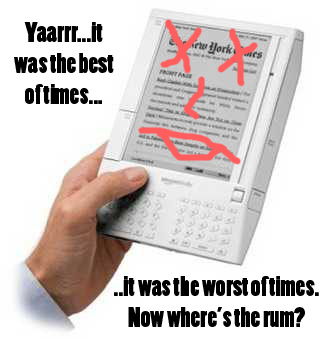 I was listening to the latest episode of TWiT the other day at work and the subject of piracy came up and how it’s–to put it simply–a game changer. Specifically, they talked about Amazon, the new Kindle, and how this could usher in an era of easier textbook piracy. When I heard “textbook piracy”, a little voice inside me went “squee.” I’m sure I’m not the only student burned by ridiculous textbook prices and what little use they’ve been to us in our college education.

I should clarify: I’m a film student.

Our textbooks (at least in the film department) were less than stellar, and I was even able to go an entire semester without needing any. Whether this is the fault of the teachers or the faculty is not the point of my little blurb here. I’m just interested in the idea that textbooks are next in line for evolution-via-mass-piracy. With college as expensive as it is now, why buy a book you don’t really need if you can get it in a .pdf and pull it up in a reader?