Teenage Mutant Ninja Turtles: The Movie is one of those films you bring out to the significant other with hesitation. I’m reminded of an episode of How I Met Your Mother where one of Ted’s (many) issues was showing his girlfriend Star Wars for the first time. Would she be all over it, or would she laugh at all the ridiculous puppetry and special effects? How would that affect the relationship? As it turned out, she actually DIDN’T like the movie, but was able to appreciate it because Ted loved it. And while I wouldn’t say I hold TMNT:TM to a similar level of excellence, I’d be lying if I said I wasn’t kind of nervous about showing off this treasured piece of childhood to my wife. I mean, what if she DIDN’T like it?

Well, I’ll let her fill you in on what she thought. What I will add are some thoughts from our recent re-watch. As it turns out, TMNT:TM has aged a lot better than I was expecting it to. Having not seen it for almost ten years, I was partially ready to start apologizing for this part and that, much like I would for something like Super Mario Brothers. The puppetry and special effects held up quite nicely, hitting a realism at times that most CGI still has trouble getting right. The dated elements were more charming than cheesy, and the more somber moments still hit the absolute sweet spot for me – Raphael’s and Splinter’s private conversation being the prime example. The overall goofiness held up as well, and remains the part that makes this film near and dear to my heart.

Now to dust off my copy of Teenage Mutant Ninja Turtles II: The Secret of the Ooze and cross my fingers once more! 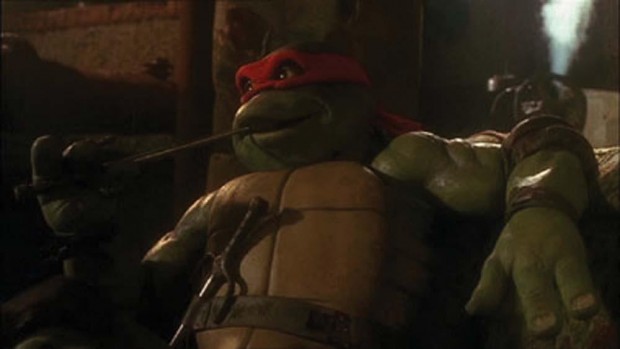 Of all the movies Jonathan kept mentioning to me as his touchstone movies growing up, the kind of cheesy but fun movies that he has strong emotional connections to, this one initially gave me the most pause. I was like, really, you’re going to eventually make me watch a movie about overgrown talking turtles who break out ninja moves and eat pizza? Yet when it came down to it, it was actually me who suggested we go ahead and take the plunge. And I was actually kind of weirdly excited about it, too. Probably it was the somewhat scary degree to which I’ve gotten into comics and superheroes lately, and with enough comic books under my belt, the mental jump to mutant ninja turtles apparently isn’t actually that large.

And you know what, I actually quite enjoyed the film. Sure, it’s cheesy, and it’s very much a product of its time, but those things give it a quaint charm that may not be exactly what the creators were going for at the time, but made it work for me now anyway. Definitely the kind of film you just have to give yourself over to, though, what with the mixture of an investigative journalism story and, well, mutant ninja turtles. Between the goofiness of the turtles, the “gangs are bad!” message, the meet-cute of the logically incompatible love interests, and the over-earnest wisdom of the giant rat Splinter, there’s a lot here that could easily be turn-offs, but thankfully (for both my evening and my marriage!), I just found it all pretty endearing. Up to and including the special effects, which are actually much better than I expected. I like practical effects anyway, and the puppets and animatronic elements are right up my alley, and the puppet work on the turtles’ faces is quite good.

All in all, I expected to at most enjoy it as a so-bad-it’s-good movie, but I actually enjoyed it for real. I’m sure we’ll get to the sequel soon enough, and I’ll get more ooze than I know what do to with (this is starting to sound like a not-very-subtle euphemism, so I’m gonna stop right there).