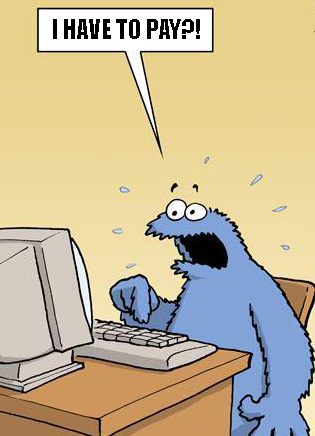 From the blog of Pandora:

The revised royalties are quite high – higher in fact than any other form of radio. As a consequence, we will have to make an adjustment that will affect about 10% of our users who are our heaviest listeners. Specifically, we are going to begin limiting listening to 40 hours per month on the free version of Pandora. In any given month, a listener who hits this limit can then opt for unlimited listening for the remainder of that month for just $0.99. In essence, we’re asking our heaviest users to put a dollar (well, almost a dollar) in the tip jar in any month in which they listen over 40 hours. We hope this is relatively painless and affordable–the same price as a single song download. (Alternatively, they can upgrade to “Pandora One”, our premium version which offers unlimited monthly listening in addition to its other benefits).

As someone who hopes to one day make a living out of being creative, I tend to side with the people making the content when it comes to issues of compensation. These people need to get paid for what they’ve created just like people who work in any other job deserve to get paid for the job they’ve done. There’s nothing that makes a “creative’s” work less deserving of financial compensation than that of a waiter, an office exec, or a city worker. At the end of the day, we all need to get paid so we can continue to live. In the case of Pandora, they should at least be able to make back some of the ridiculous royalties they have to pay the music industry, right?

Not if you’re a cheap bastard. I can’t count on my hands how many times I’ve heard people state that Pandora charging for extended use is wrong. These people come at it with a sense of entitlement, with the idea that they shouldn’t have to pay to listen to what is essentially “a radio.” When confronted, they backpedal and explain that they’re cheap and can’t afford the fees.

$.99 is hardly expensive in my book. And if you’re a power user, $.99 for the month is ridiculously cheap. Why not pay the small fee and help out a company that provides such an amazing service? Or you know, maybe buy your music for a change?

The big mistake any of us can make is to assume that we deserve ANYTHING for free. These services come to us cheap as a convenience, not as a requirement. These companies certainly aren’t breaking the bank by giving away their content and / or services so we should take a step back and be grateful we only have to pay a dollar for unlimited internet radio.