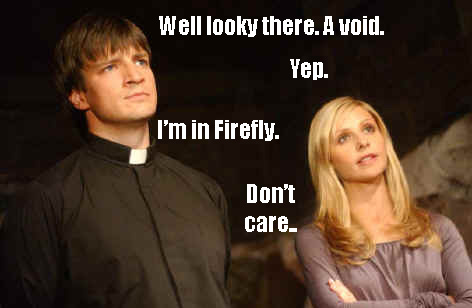 Writer’s block is a terrible tragedy that befalls even the best of writers. How they get through this debacle varies. Some take a walk to clear their mind, some eat a bunch of junk food, some watch movies, some take drugs, and so on and so forth. I’ve written a few blog posts about this before and thought I would do so again. Truth is, I’ve been in a bit of a “void” these past few weeks, and really haven’t had that much to write about be it for the blog or for my own script. The question then is, do I “write despite the void?”

The less-short answer: yes, but it sure is a bitch and a half.

See, when you’re in the “void,” you’re fighting an uphill battle. The ideas are all gone, and the inspiration that you may have once had decided to go on that Vegas vacation it has been talking about all these years and not leave you a contact number. You still have to write, though, which brings up the obvious question: How? Here’s some things that have helped me get something onto the page, despite having nothing up there in my noggin.

Sounds cheesy, but I reward myself for writing. I reward myself MORE for writing in the void. Ice cream, sweets, coffee, anything that might encourage me to get a few words out. Hell, I’ve even used social engagements as a reward for writing. Oftentimes, the stuff I write under these conditions aren’t all that great, but at least it’s something.

Sometimes I’ve been able to crank out a page or two of something through what I call the “White Noise Method.” It’s a really simple method involving having the television on, the itunes playing on random, and having my cats racing each other around the room. Somehow through all the chaos I can get myself to focus. If you don’t have a cat, I’m sure you can substitute with a second tv.

This is perhaps the most effective, but the hardest to initiate. It involves halting your access to the internet while you try to write.

Another method that I’m always keen on trying to get myself writing more is one in which I gather with one or more people and just write. Sometimes, being amongst others is all it takes to get the creative juices flowing. You can step away from the page briefly to chat, and then just as quickly return. You also run the good chance of gaining some insight to what you’re writing as well as some useful brainstorming for future projects.

Anyway, just a few thoughts on what you can do to write while you’re in the “void.” It might be tough as hell, but eventually you’ll find that you have a lot of stuff written that you can go back and re-write. Oh yeah…re-writing. That’s a different story altogether.